JURY OF THE EIGHTH BAŠTA FEST

We are happy and proud to announce the jury of the eighth Bašta Fest!

The main jury consists of three members: Branka Katic, an actress from Serbia, Ivan Bakrac, a director from Montenegro and Asja Krsmanovic, a playwright and selector of Sarajevo Film Festival for student films. The awards will be given for: the best film (Golden Imagination), the best male and female role (Golden Interpretation). The jury has the right to award two special mentions, as well as to divide or not award any of the prizes.

At the third Bašta Fest, the award for the best camera (Golden Visualization) was established, and is awarded with the support of the rental company “Cineplanet”. The juror of the eighth Bašta Fest for this award will be Mikša Andjelic, director of photography from Serbia.

A youth jury consisting of high school students from Bajina Basta is also awarding its prize for the best film and their participation in the program itself encourages the critical attitude of the local youth. This year’s Youth Jury will consist of: Tijana Spasojevic, Vanja Jevtic and Nemanja Jovanovic. 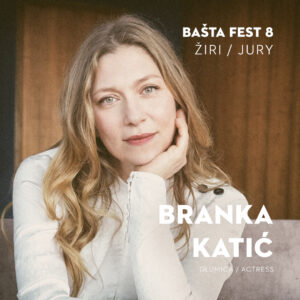 BRANKA KATIĆ is an actress who made her debut at the age of 14 in the film It’s Not Easy with Men, followed by studying at the Academy of Arts in Novi Sad and roles in films Black Cat, White Cat, We Are Not Angels, Black Bomber, and many others. After a career abroad, Branka has recently returned to Belgrade and to the Serbian theatre scene, working at the Belgrade Drama Theater. 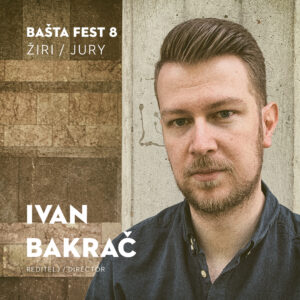 IVAN BAKRAČ was born in Nikšić (1987). He completed his undergraduate and master studies in film directing at the Faculty of Art and Design in Belgrade. A director and screenwriter of films that have participated in numerous international festivals and won awards, he was also a participant in various programs such as Berlinale Talents, Talents Sarajevo and Zurich FF Academy. He works as a festival programmer at the Free Zone Film Festival in Belgrade, Film Festival in Herceg Novi and Drim Short in Macedonia. Films: Wars (2013, medium length); Our skin is going to gray (2014, short); Malesh (2016, short), After Winter (2021, feature film). 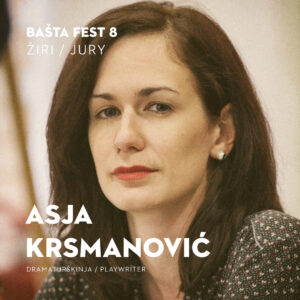 ASJA KRSMANOVIĆ was born in Sarajevo in 1988. She graduated in dramaturgy from the Academy of Performing Arts in Sarajevo. She has worked as a playwright for theatre plays, a screenwriter for short films, as well as for radio and television projects. From 2011 until today, she has been working as the coordinator of the Competition Feature, Competition Short and In the Focus program, Sarajevo Film Festival, and since 2017 she has been the programmer of the Competition Program – Student Film. 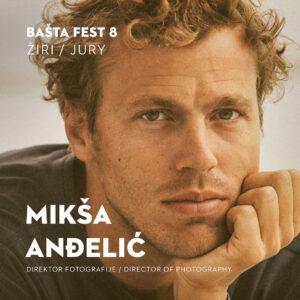 MIKŠA ANĐELIĆ was born in Belgrade in 1987. He graduated from the Department of Camera at the Faculty of Dramatic Arts, Belgrade. Since 2010 he has been working as the Director of Photography on feature and documentary films, and TV commercials. For his debut camera work in the film Zlogonje 2018, he received the award of the Serbian Association of Cinematographers – SAS for innovation in the visual approach to film photography. As the author of numerous commercials and music videos, he has worked with the most important Serbian and foreign productions from the world of film and advertising. He is engaged in artistic and advertising photography. He loves the sea and the mountains.

TIJANA SPASOJEVIĆ is a third-year student of natural sciences and mathematics at the “Josif Pančić” High School in Bajina Bašta. An advocate for youth activism and a member of the Office for Youth. In her free time, she photographs nature, school events and friends. In addition to her daily responsibilities, she finds places for the city’s scout group, which brings her new experiences and friends. She tried her hand at children’s amateur theatre, where she found her place in two plays. 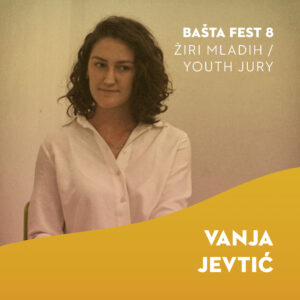 VANJA JEVTIĆ is a first-year student of the socio-linguistic department of the “Josif Pančić” High School in Bajina Bašta. She is an adventurer by nature. She loves and has tried her hand at a large number of sports, but finds herself most attracted to alpinism, and sustainability in general. Amongst other things, she aspires to continue her education at the Faculty of Political Sciences. 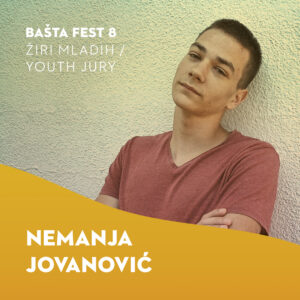 NEMANJA JOVANOVIĆ is a second-year student of natural sciences and mathematics at the “Josif Pančić” High School in Bajina Bašta. He is an optimist and a generally friendly person. He plans to continue his education at the Faculty of Philosophy, majoring in Psychology and Andragogy. In his free time, he plays sports – basketball and volleyball.