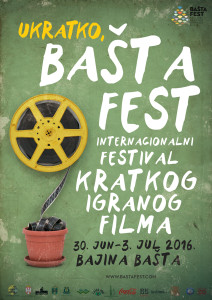 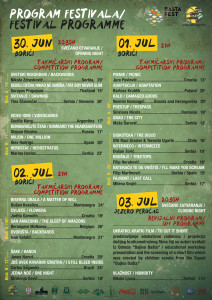 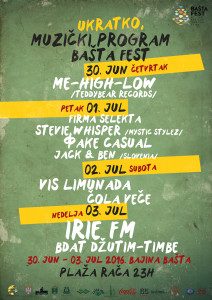 The third Bašta Fest was opened by actor Marko Janketić.

The jury comprised of: Damjan Radovanović, handed out the award:
Golden Visualization (Best Camera) to Ivan Marković for the film “Backyards” (dir. Ivan Salatić, Serbia).
This award was included and handed out for the first time in 2016 with support from the rental house Cineplanet.

Bašta Fest handed out the award:
Bašta Personality to Nenad Marić, for the contribution of an individual to the promotion of Bajina Bašta and the entire region.

To cut it short, short film is a free educational film workshop for students of later elementary school grades, conceived as an intensive four-day programme during which short lectures are held, with the outcome being a process of creating a short feature film. The co-ordinator and author of the workshop is Maša Seničić, and other lecturers that participated were: Raško Miljković (film director), Ana Danilović (camera operator), Mihajlo Radović (camera operator and sound designer). To cut it short, short film is a workshop that was held for the first time in 2015, with excellent results and to the mutual satisfaction of the children and the festival. The cooperation was expanded in 2016 to the scouting squad “Bajina Bašta”, since this was the ideal way to combine nature with an educational programme intended for school-age children in an environment that is well-known to the young scouts. This kind of programme enables an exciting exchange of ideas and dedication of team members, and ten participants watched and analyzed together with the lecturers a number of films in an improvised cinema. Scouts from the “Bajina Bašta” squad are authors of a film which is a result of the workshop, and this short film entitled “Scout Challenge” was shown at the closing of the third Garden Fest at Lake Perućac.

Photographs were exhibited on tree trunks in Borići Park, showing nature in specially created frames modelled on windows from the village of Zaovine on the mountain Tara. These authentic frames were created by the “Prozor” gallery, whose only products are these handmade windows with a view of photographed landscapes of Bajina Bašta and the region. Wooden windows with a classical appearance and form are typical for the area of the Tara Mountain, and the village Zaovine. They are small in size, decorated simplistically, reinforced, and painted with simple basic colours. All windows are handmade in a small workshop in Bajina Bašta, and traditional tools are used when crafting them.