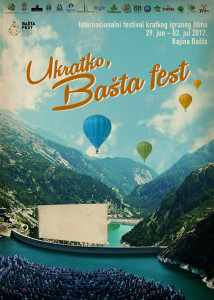 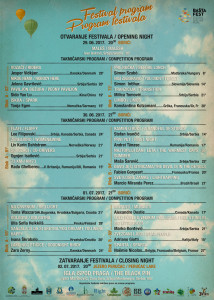 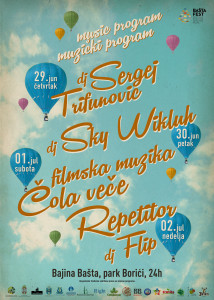 The fourth Bašta Fest was opened by actress Hana Selimović.

Golden Imagination (Best Film): film “First night” (dir. Andrei Tanase, Romania)
jury’s explanation: This intimate story of a young man who needs to finally grow up and become a man, shocks in one scene after the other, revealing a traumatic relationship with his father. On the other hand, the criticism of a society in transition is reflected in the details, which can be found in both rooms and the bathroom in which this night film drama is set. Witty at times, but also painful, it presents in its essence a metaphor of society which is maturing despite not being ready for it yet.

Golden Indication (Best Director): Maša Šarović for the film “The Warmest Days of Summer”, Serbia
jury’s explanation: The visual process, unpretentious and minimalist in its direction, gives the actors room to freely create the fate of two young people in love, trapped in their poor everyday life, having only each other as support. A particular film expression, created with precision and thought, leaves an impression of spontaneity, and the form and contents are merged into a particular author world, as if it were already a mature author.

Golden Interpretation (Best Actress): Ivana Vuković, for playing Jana in the film “Transition” (dir. Milica Tomović, Serbia)
jury’s explanation: The empathy that she evokes by going to the heart of the problem – about which most people know little or nothing at all – is managed by using hiding as the acting device, with which she created a tension worthy of great film actresses. With her sincere, touching and simple acting, she breaks down all prejudices that are typical for this region.

Golden Interpretation (Best Actor): Henrik Vestergaard, for playing Lars in the film “Riders” (dir. Jesper Vidkjær, Denmark)
jury’s explanation: Because the point, essence and message of the film are seen and felt on his face, in close-up. Because he managed to emotionally convey the complexity of the character and the strong inner struggle with conscience by using minimal acting tools. Because he gave a combative macho character all the necessary tenderness, a sense of guilt and the need for change.

Golden Inspiration (Best Screenplay): film “You Dreamt You Were Happy” (dir. Ivana Škrabalo, Croatia)
jury’s explanation: As in the best stories by Alice Munro, where instincts, the irrational and basic human need for contact intertwine, this film about one day in the life of a young girl and the crisis that she goes through opens up all the moments of her life like a flower. With a strong internal logic, possessed only by dreams, this film is felt with the soul, because only in this way can moments change our lives.

“Bee Stung in Big Little Bees” (dir. Marko Ðorđević, Serbia)
jury’s explanation: Because it is tragic and witty, surreal and natural, because it is about love and loneliness, because it parodies stereotypes about artists, because it is visually authentic, brave.

The jury comprised of: Ðorđe Arambašić, handed out the award:
Golden Visualization (Best Camera) to Stefan Ðorđević for the film “A Handful of Stones” (dir. Stefan Ivančić, Serbia).
This award was included and handed out for the first time in 2016 with support from the rental house Cineplanet.

Bašta Fest handed out the award:
Bašta Honour, to the “Tara” mountaineering club, for outstanding contribution in the promotion of Bajina Bašta and the entire region.

Critical Camp is a new educational program that Bašta Fest is implementing in cooperation with the association Filmkultura, designed in the form of a film criticism workshop held during Bašta Fest. The idea is to raise awareness of criticism among young people, and this group became curious and committed to the adventure of careful viewing and in-depth consideration of films from the competition programme, with the support of Ivan Velisavljevic and Masa Senicic. In addition, critical critics were in constant contact with film authors who were guests of the festival, as well as with the Youth Jury, comprised of three high school students from Bajina Bašta.

Mini Film is a free educational programme for children and young people whose goal is to popularize film art among the youngest audience. The idea of Mini Film is to awake creativity and curiosity among children, and above all to create a prerequisite for a critical attitude regarding what they consume. Practical exercises in which children independently come to conclusions are the best way for them to adopt and subsequently apply the knowledge acquired, while specially designed games encourage them to take an active role in creating something they have only been able to participate in as observers. Through interactive workshops, which will result in optical toys and a short film, this programme draws children into the world of moving images. By learning the simplified processes of film-making, children are able to better understand the art of film and, hopefully, develop a love for it.

Mini Film is a programme of Filmkultura, an association for education in the field of audiovisual art, which has been held in around 20 cities throughout Serbia since 2014.