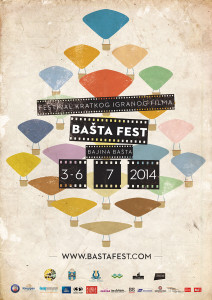 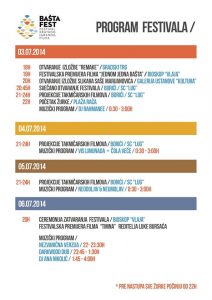 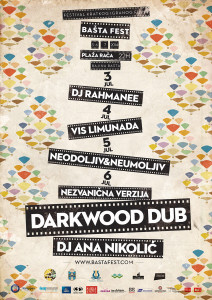 The first Bašta Fest was opened by actor Nikola Rakočević.

The jury comprised of: Vladimir Blaževski, Mladen Đorđević and Hristina Popović, handed out the following awards:

Golden Imagination (Best Film): film “The Bag” (dir. Marko Sopić, Serbia)
jury’s explanation: For a powerful story about a heroic act at a time when heroism seems almost impossible. Referring to socially engaged works from the golden age of Yugoslav film, as well as some works by Ken Loach, Sopić reminds filmmakers of the alarming importance of dealing with social issues during the global economic crisis. With the camera settings, the author allows the ambience to tell as much as the actors, while putting them to the task of attracting the audience’s attention with subtle expression, and not expression of strong intensity.

Golden Indication (Best Director): Rastko Petrović for the film “Real Good Paneling” (dir. Rastko Petrović, Serbia)
jury’s explanation: Petrović builds an effective confined-space drama with a very mature directing process. Under the apparently common and already seen situations in the life of two young characters in love, the film slowly reveals a hidden world of complicated interpersonal relationships and problems in the bringing two distant worlds closer together. Using the expressiveness of film silence, as well as energetic, dynamic camera work and mise en scène, the author motivates the actors to deliver their best, thus creating an unobtrusive, coherent film story, whose strength comes not from the surface, but from within.

Golden Interpretation (Best Actress): Vesna Trivalić, in the film “The Bag” (dir. Marko Sopić, Serbia) and Christelle Cornil in the film “Electric Indigo” (dir. Jean-Julien Collette, Belgium)
jury’s explanation: Vesna Trivalić returns in style to Serbian feature film, in a genre in which we had never seen her before. Her striking role as a hero’s wife, an outsider from the dying working class, abounds with exceptional, subtle solutions, unpredictability and twists that only great actors are capable of. Vesna builds a female superhero in the murky surroundings of gray buildings and socially vulnerable people living from one day to the next.

The second award goes to Christelle Cornil who creates with extraordinary skill the image of a woman lost in today’s new forms of interpersonal relationships, one who is the victim of imposed, politically correct living patterns that are typical of contemporary Western civilization. In not too many minutes, the actress gives us an extremely broad and complex character development, while avoiding simplifications.

Golden Interpretation (Best Actor): Vladimir Gvojić, in the film “You Look Awesome When I’m Fucked Up” (dir. Luka Bursać, Serbia)
jury’s explanation: Gvojić interprets with ease, precision and authenticity the characters of young urban heroes, who are trying to find a way out of the rather closed and hopeless universe in which they exist. Gvojić brings to the silver screen a completely new energy with the sensibility of someone who isn’t an actor by vocation and with the skill of a professional actor.

Golden Inspiration (Best Screenplay): Branislav Jevtić for the film “Our Skin Is Going to Gray” (dir. Ivan Bakrač, Serbia)
jury’s explanation: Actor and screenwriter Jevtić offers us an excellent template, which together with an inventive directing process, represents a successful analysis of contemporary sexual neuroses, posing an extremely attractive yet difficult challenge for the actors because in this film, the naked body, deprived of any face, becomes their key instrument of expression.

Special award for supporting role: Dubravka Kovjanić, in the film “Bleak” (dir. Momir Milošević, Serbia)
jury’s explanation: For many subtle and intelligent micro-solutions in the construction of a character of a lonely woman, who tries to survive in an alienated urban environment by acting as a predator. With her acting, Dubravka adds freshness to the horror genre.

Special award for supporting role: Rafal Fudalej, in the film “The Heat” (dir. Bartosz Kruhlik, Poland)
jury’s explanation: Rafal manages to avoid all the pitfalls and clichés that are otherwise imposed by portrayals of psychopaths and creates a very striking role, one which we will remember for a long time.

The Youth Jury comprised of: Jelena Jeremić, Milija Milekić and Ljubica Đurić, handed out the award:
Youth Jury Award (Best Film): “Red Snow” (dir. Luka Popadić, Serbia)
jury’s explanation: For us, “Red Snow” is the best film because it shows another, weaker side of cruel and unyielding occupiers. The German officer’s moral dilemma is compelling.