We are excited to share our last pre-festival news with you! Thus far, each Bašta fest was opened by a young actor or actress who has enjoyed great success in the last year. With each one of them, Bašta fest has been growing, we look forward to their new roles and we are really proud of them. Past editions of Bašta fest were opened by Nikola Rakočevič, Slaven Došlo, Marko Janketić and Hana Selimović, and the fifth Bašta fest will be opened by – Milan Marić! Following premiere of his first international feature “Dovlatov” at this year’s Berlinale, Milan hasn’t been taking a break – he has been winning awards and roles in theatre, film and TV shows which we are very much looking forward to seeing! 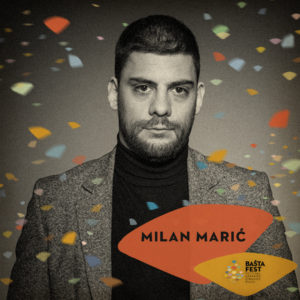 When we asked him what Bašta fest means to him, he shared with us: „Bašta isn’t the result of the planned cultural strategy of the people who should create one. Bašta wasn’t made to be an ideal promotion of one of the most beautiful parts of Serbia. Bašta is something that people didn’t believe in at the beggining. Bašta is the result of braveness of young people who were not willing to wait, to give up when they were not believed in, who knew what they want, who didn’t know how but they were willing to learn by themselves. Damn, Bašta became a brand!

We will see you on July 5th, at 20:30, in Borići park, at the opening of the fifth Bašta fest! We have prepared many surprises for you, so #tocutitshort, you are very welcome!