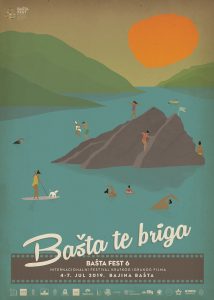 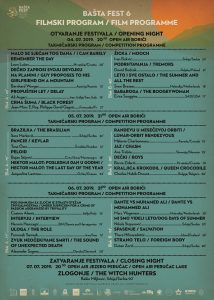 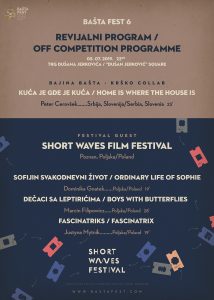 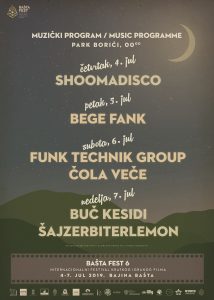 You can check this year’s official poster of the festival, as well as detailed film and music programs, by clicking on the images.

The 6th Bašta Fest was opened by actress Isidora Simijonović.

Golden Imagination (Best Film): film “Lunar Orbit Rendevous” (dir. Melanie Charbonneau, Canada)
jury’s explanation: The magical realism of this film moved not only us but the entire audience as well. Quirky characters, bittersweet atmosphere and intelligent use of sound design made this film stand out among other very well made shorts. It wasn’t an easy decision, but we unanimously decided to award „Golden Imagination“ for the best film to “Lunar Orbit Rendezvous” by the director Melanie Charbonneau.

Golden Indication (Best Director): Alexander Sagmo for the film “Sound of the unexpected death” (Denmark)
Jury’s explanation: A tragically beautiful film, with precise timing and a perfectly controlled rhythm that reminds us of the ever shocking imminency of death. The award „Golden Indication“ for best director goes to Alexander Sagmo for the film “The Sound of Unexpected Death”.

Golden Interpretation (Best Actress): Sofia Kokkali, for the role of Sofia in the film “Hector Malot: The last day of the year” (dir. Jacqueline Lentzou, Greece)
Jury’s explanation: The award for the best female performance “Golden Interpretation” was a unanimous decision. For her unique and authentic presence on camera and power to convey strong emotion through very delicate expressions we’ve decided to award Sofia Kokkali for her performance in “Hector Malot: the last day of summer”.

Golden Interpretation (Best Actor): Uroš Aziraj, for playing Mile in the film “Mooch” (dir. Ivan Bukvić, Serbia)
Jury’s explanation: For his ability to ensnare the audience into every scene, and deliver such a mesmerizing performance, for his natural charisma, we’ve unanimously decided to award Uros Aziraj „Golden Interpretation“ for the best male performance for the role of Mile in “Mooch”.

Golden Inspiration (Best Screenplay): Charles Habib Drouot for the film “Queen Crocodile“ (dir. Charles Habib Drouot, Belgium)
jury’s explanation: This study on the theme of immigration caught our attention due to its original approach, skillfully inserted mystical elements and the carefully constructed mystery around a clash of cultures. The award for best script “Golden Inspiration” goes to screenwriter and director Charles Habib-Drouot for “Queen Crocodile”.

Jury’s explanation: We would like to award the special mention for the script to “Black Forest” and screenwriter Daisy Sadler by directors Jean-Marc E. Roy and Philippe David Gagné. The absurdity of the story mimics many aspects of real life, packaged into a very well crafted stylized murder reconstruction that takes the audience on a very weird but compelling journey.

The jury comprised of: Aleksandar Ilić, handed out the awards:

Golden Visualization (Best Camera) to Milica Drinić for the film “The Foreign body” (dir. Dušan Zorić, Serbia).
This award was included and handed out for the first time in 2016 with support from the rental house Cineplanet.

Jury’s explanation: „The Foreign body“ has a clear, precise and brave concept that follows and contributes telling the story on the best way“.

Special mention for cinematography: Sam Du Pon for the film „The summer and all the rest“ (dir. Sven Bresser, Netherlands)

Jury’s explanation: Film „Mooch“ presents a realistic, emotional story that is happening increasingly more often and that people rarely notice, which leads to a tragic end. While film awakes a range of emotions, the empathy dominates. Actors carried it in the best way, considering their age.

Bašta Fest handed out the award:
Bašta Honor, to the humanitarian association „Dobročinitelj“ for a huge contribution in the field of humanitarian work in this region.

The “Set Design” workshop involved the creation of various spaces aiming to visually activate the space and allow the Bajina Bašta locals and guests of the festival to use that space to take photographs during the festival. The spaces created were aesthetically different and separate installments, involving parts of costumes and props to be used for the photos, all with a different film genre theme. The materials used were various usable objects and parts of the furniture that can be recycled.
The workshop participants were Milena Grosin and Nađa Vukorep, students at the department for Scene architecture, technology, and design at the FTN in Novi Sad, and were mentored by Selena Orb.

The sixth Bašta fest, with the support of Film Center Serbia, has introduced a new industry program – a free workshop for project pitching meant for young film directors from Serbia – Bašta Pitch!

From the selected applicants, mentor Mina Đukić has chosen five projects and the film directors have worked with her and our guest lecturer Milan Stojanović in order to prepare the final pitch (presentation) which happened on the final day of the festival when the jury chose the winner. The winner of the first Bašta Pitch is Nikola Polić, with his project “Organisms” which received financial support of 500€ to kickstart the realization. The jury members of the programme were festival selector Nikola Ljuca, mentor Mina Đukić and film producer Jovana Karaulić.e.
The participants of the first Bašta Pitch were:
„Organizmi“ – Nikola Polić
„Mesečarenje“ – Jovan Dimoski
„Dva sveta“ – Tamara Broćić
„Tupo propadanje“ – Aleksa Mihajlović
„Nasledstvo“ – Nemanja Novosel