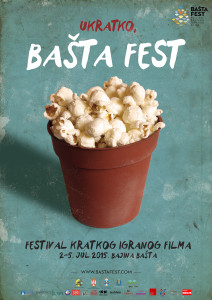 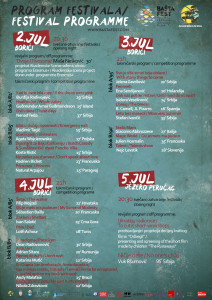 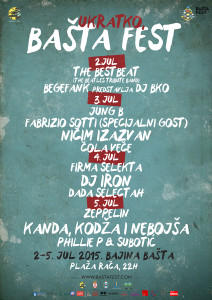 The Second Bašta Fest was opened by actor Slaven Došlo.

To cut it short, short film is a free educational film workshop conceived as a four-day programme whose focus is the process of creating a short feature film. In a time that enables affordable recording equipment to all curious authors, it is necessary to provide basic knowledge regarding film making and to establish the basics of critical thinking among the youngest. Through a type of instructed game, participants also have the opportunity to learn about teamwork, as well as the responsibility of being members of a film crew in which everyone has their own responsibilities. The idea is to give them insight into what a creative process looks like from the beginning to the end – all of this directly from the experience of young film professionals with whose help the participants get answers to various questions. The coordinator and author of the workshop is Maša Seničić (screenwriter), and the lecturers are Raško Miljković (film director), Nemanja Veselinović (camera operator) and Mihajlo Radović (camera operator and sound designer). The workshop’s product is a short feature film whose authors are elementary school pupils, and this achievement entitled “Runaways” was premiered at the closing of the second Bašta Fest, in the curated part of the programme.

As part of this visual arts workshop, participants get to know the history of TV receivers and TV programmes, together with the process of transferring images from studios to TV devices, as well as various types of TV programmes. The creative part implies that everyone create their own story (programme) in their box (TV receivers). The material involves the use of various types of ready and hand-made elements, with a special emphasis on engaging children in the creation of hand-made image solutions. During the entire duration of the festival, the exhibits produced at this workshop were shown at the entrance to the Open-Air “Borići”.