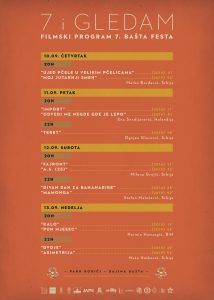 You can check this year’s official poster of the festival, as well as detailed film program, by clicking on the images.

The 7th Bašta Fest was opened by actors Filip Đurić and Ivana Vuković.

Because of the pandemic, the film program of the 7th Bašta Fest was non-competition, with a focus on Serbian and regional authors. It consisted of 7 debut feature films by the directors who have screened their short films at the Bašta Fest in previous years, and which were screened again this year. Music and other programs were cancelled this year.